A new e-book of 142 poems compiled from all my chapbooks is now available for only $1.99   Go to: Ordering Books and be one of the first to get my new book  Atoms and Opinion

My first book of poems Paper Secrets? was published in 1983, it is a collection of forty poems including the first poem that I ever wrote, “Wish” which is the basic question about our beginnings, that I’ve been asking myself ever since then.  Even though I wrote this book when I was the tender age of twenty-six, I still feel some of the poems are some of my favorites.  This book is only available at poetry readings. 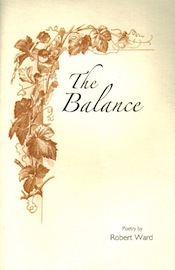 My second book The Balance was written over a twenty-six year period, and published in 2009.  Unlike the first chapbook, that was typed-up using a 1930’s vintage typewriter, this is where I entered the computer age, with the  help of my graphic artist, who did all the layout and without her help, I would probably still be using crayons and white-out.  This book contains thirty-seven poems and reminds me of my grandfather who lived until the age of 102 because of poems like “The Raspberry Plants.” 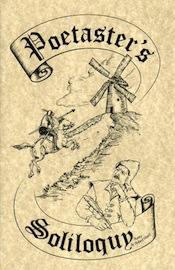 My third book Poetaster’s Soliloquy was published in 2010 and contains thirty-seven poems.  It runs the gamut of emotions from the guilt of losing a child, to the nonsense similar to the poetry of Ogden Nash. 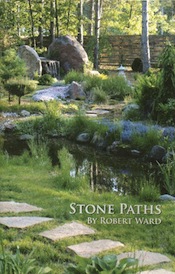 My fourth book Stone Paths contains thirty-five poems and is a little less serious than the previous two.  On the cover is a photo of my Japanese garden, which is the best thing I’ve ever done, by a hundredfold.   In this book I have include poems about the garden and nature, something that most of us could use more time viewing.   Along with the seriousness of prose or poetry, I have included some feeble attempts at humor, such as “Wanted-Woman for the Sensitive Guy, and “The Great Cell Phone Tragedy of 2019” and  others, in hopes to keep any of my readers from committing seppuku immediately after reading my writing, along with various disclaimers and apologies.  In my next book,  Eternity’s Highway  I will have less silliness, and it will be much more of a philosophical read, for those of you who do not care for this type of  lighter stuff. 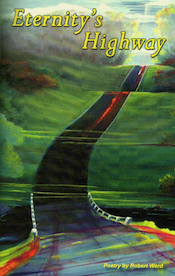 Eternity’s Highway is by far the most serious and philosophical book out of the nine books that I have written.  It contains forty-seven poems all being prose with none of the whimsy of my previous writing.  I wrote this book out of my desire to establish some sense of decency, in what I consider a media sometimes filled, with indecency.  And although I know there is some good stuff out there, it seems that the outrageous consumes the vast majority, and I believe that our society needs to remind itself, of things other than the sensationalism and spectacle, of what now seems to be portrayed, as a normal.

The Truthful Idiot, is my sixth book and it is still quite serious or philosophical, but it also contains a few lighter poems and a few sayings incorporated into the material and is somewhat a carry over from my last book, but not quite, to the same degree.  The poem “If I Had a Story To Tell,’ is one of my personal favorites, and if you like the prose more than rhyming verse, then this book is for you.  For there are only two rhyming poems in the entire book and perhaps, I have misled some of you, by putting one of the rhyming ones on the back cover, if so, I apologize.

Goose Weakness is a collection of subjects, that its longer subtitle suggests.  The title “Goose Weakness” was a quote taken from a Michael Perry book that I admired, where Michael’s brother, an E.M.T. arrives on a 911 call, to find a goose covered with a Frisbee laying on an elderly ladies lawn, and after doing what they could for the animal, they logged their ambulance call as”goose weakness.”   Although there are a few poems about people, it main emphasis, is nature.  This book also contains a few sayings, that tend to lean towards the humorous side.

Circular Circularity is my eight book, and for most of my writing life, I did not read other poets work, because I did not want to influence my writing with other people’s styles.  And although I was familiar with the more famous poets, I did not go out of my way, to read poetry.  But after thirty years of writing, I started looking at other poets.  This book and also my ninth book, I must admit, were hopefully influenced by Billy Collins and I have included a feeble attempt to honor him, by mentioning his name in the included poem entitled “An Extra Chair.”

The Wild Imagination of Larsen Snieville

The Wild Imagination of Larsen Snieville  contains poems, humorous sayings and a piece entitled “The Twainistic Roundhouse Punch of Westly Stovechek” which is another poor attempt to copy another famous style, namely, Mark Twain. Well, at least I had to try!